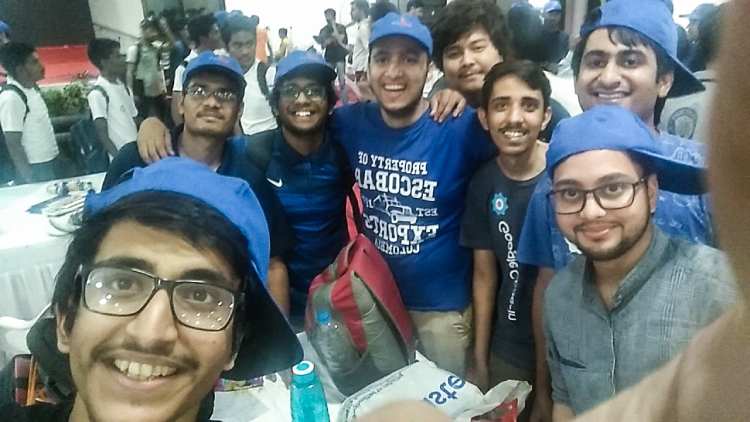 Team Jhalwa Bois was a finalist at the Smart India Hackathon 2018.

Team Jhalwa Bois was a finalist at the Smart India Hackathon 2018 with their innovation; MyPanchayat Your Gram Panchayat Information, in your native language

Following are the team members
The team consisted of six students from IIIT-Allahabad with two mentors who are an alumnus of IIIT-Allahabad.

The team designed and built an Android application that leverages artificial intelligence and geospatial data provided by ISRO to help public planning officials and decision-makers take data-driven decisions at Panchayat Level. The development was done under the mentorship of ISRO and IIIT-Allahabad.

The innovation uses data-points as roads, rivers, land-usage pattern, settlements, etc. at Gram Panchayat level provided by ISRO satellites and provides a voice-interface in a native language to the end-user.

A decision-maker can ask voice queries to the app as “where to open schools”, or “where to build roads with a given budget”, and our product scans geographical data of the place to find the right locations to do developmental work which would otherwise have been a tedious task if done offline or with a traditional approach.

“The very pain-point of any mobile application targeted towards Indian users is the language. We resolved this by providing a voice-based interface that understands multiple languages – Hindi, Marathi, Bengali, Telugu, English at the moment, which is extensible.

Traditional approaches towards investment for infrastructure and public utilities went with manual planning which is error-prone and slow. Simple decisions like where to open the next 100 schools the state can get influenced by which local representative has a larger say in the assembly, and a lot of time being wasted in gathering data and deciding the final list of investments.

Instead, we can use algorithms to combine several variables – existing schools, number of schools per thousand people, the proximity of schools from settlements, and even find out which empty plots shall qualify for building new schools. This entire process can happen in a couple of minutes instead of a couple of months and in a very non-partisan way.

And given the government is launching more advanced satellites and organizations like ISRO are working on developing data-warehouses and mapping capabilities, we can gather more and more data to answer more complex questions very precisely. It would definitely be a boon to society.”

The project built during the hackathon was a minimum-viable-product that just worked for the demo. It certainly required a lot more rework and polishing to be usable by an end-user and scale under real-world usage.

The team was approached by the Smart India Hackathon representatives on behalf of ISRO to further work on the project for a period of six months and develop a usable version of the application. They shipped a product that works on a sample dataset (they did not have access to the actual dataset of the entire country obviously).